"So he had fallen": A blackboard on James Baldwin's "Go Tell It On The Mountain" 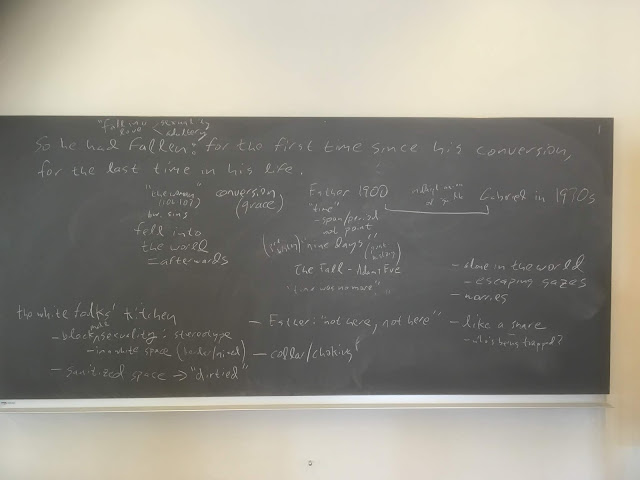 The blackboard from my class's discussion on 4 October, 2018, of a passage from James Baldwin's Go Tell It On The Mountain. This passage, to be precise:

So he had fallen: for the first time since his conversion, for the last time in his life. Fallen: he and Esther in the white folks’ kitchen, the light burning, the door half-open, grappling and burning beside the sink. Fallen indeed: time was no more, and sin, death, Hell, the judgement were blotted out. There was only Esther, who contained in her narrow body all mystery and all passion, and who answered all his need. Time, snarling so swiftly past, had caused him to forget the clumsiness, and sweat and dirt of their first coupling; how his shaking hands undressed her, standing where they stood, how her dress fell at length like a snare about her feet; how his hands tore at her undergarments so that the naked, vivid flesh might meet his hands; how she protested: “Not here, not here”; how he worried, in some buried part of his mind, about the open door, about the sermon he was to preach, about his life, about Deborah; how the tape got in their way, how his collar, until her fingers loosened it, threatened to choke him; how they found themselves on the floor at last, sweating and groaning and locked together; locked away from all others, all heavenly or human help. Only they could help each other.  They were alone in the world.
Posted by Andrew Shields at 9:58 AM