The Toe of Human Understanding

A trait I admire in poets (and other writers) is the ability to hear the poetry in the speech of people who would probably reach for their guns (metaphorical or literal) if you said they sound poetic. As in this poem by Dilys Rose, from Twinset, her collaboration with Karen Knight, published by Knucker Press (there's a telling illustration by Polly Thelwall, but you'll have to buy the book in order to see that!):

THE TOE OF HUMAN UNDERSTANDING

Here's me, out by the courthouse for a fag,
in the wedding suit, tattoos mostly under the cuffs
of the jacket. It's pissing down. Nobody's about. Not even
a piper to nip the heid with Wha Haes and dirges.
My legal rep's off round the corner for a latte
with the Filth. Just me and Maister Enlightenment
up on his plinth, a traffic cone on the brainy conk,
pigeon on the neb, rain dripping from his chin
onto the Spartan—no the neo-Classical gear.
What would any self-respecting empirical philosopher
be thinking, posing in some eighteenth century
town house studio, barefoot, near enough bare-arsed,
kitted out in a low-slung toga? No central heating then:
even in the height of summer, it could have been Baltic.
Psshht. No joy in soggy tobacco. If only the boy
had been here in the flesh to gen me up on how to frame
a foolproof argument, plead my case for the fallibility
of human understanding. But no. Only his likeness
for company, gazing into the middle distance.
I rub his toe, his big green toe—verdigris—and hope
some wisdom will rub off on me. And on my legal rep.
(If he hasn't a clue it follows that I haven't a chance in hell.)
Read about this nonsense in The News. Folk say the toe
of David Hume is wearing thin from all the rubbing.
What would he think about his countryfolk resortimg—still—
to such irrational carry on? Right. Time for the verdict.
Posted by Andrew Shields at 11:09 PM No comments:

An interview with Andrew Philip as part of his virtual book tour on the publication of his collection The Ambulance Box.

AS: Nobody would fail to notice the presence of Scots words in your poems. But as an English-language poet living in a German-speaking city (Basel), I was also quite struck by the presence of German words and phrases in several poems.

AP: I spent a very formative 20 months living in Berlin before I went to university in Edinburgh, during which my German became quite fluent. That was 15 plus years ago and those skills have undoubtedly atrophied to an extent, but the experience still exerts an influence on me.

The German words and phrases are there for different reasons in different poems, but I suppose they all function to give the work a more international — or at least a more European — context. They also serve one of the functions that using Scots and Gaelic serves: as a playful resistance to the international weight of English.

AP: I first encountered Rilke when I was in Berlin. The tutor of the German class I went to gave me a gorgeous Insel Verlag edition of his collected poems, so my first experience of a Rilke poem has almost always been in the original, not in translation.

My first attempt at translating Rilke was a Scots translation of "Der Panther" when I was a student. However, I was kicked into translating him more seriously when a couple of friends set about a version of "Herbsttag". Their first draft rendered "Der Sommer war sehr gross" as "Summer was opulent." It just made me think no, no, no! Too high.

I began by translating into English but soon thought that it might be more effective putting Rilke into Scots because the sound of the language is generally closer to German than English is. I soon came to feel that I'd be doing my fellow Scots a service if I could provide them with strong Scots translations of Rilke and am very pleased that even non-Scots seem to enjoy the pieces in the book hugely.

Another great German poet I came across in Berlin is Celan. I translated some of his poems into Scots when I was a student, but those versions have stayed in a virtual drawer for a long time. I might return to him at some point, but David Kinloch has some good Scots versions in his collection In My Father's House.

AS: "Not everything / is as simple as it might seem." Is it safe to read the last sentence of "Wilderness with Two Figures" as a summary of Andrew Philip's poetics?

AP: It is, though you should probably wear a hard hat. I'm certainly not interested in writing poetry in which everything is on the surface and straightforward. I'm not terribly interested in reading that kind of poetry either. I hope that the reader enjoys my poems enough and/or is intrigued enough to revisit them.

AS: Given that, what about these lines from "To Bake the Bread"?

Perhaps you call us 'simple' for our ways—
I have heard it said the educated do.
Why wish for a life more complicated
When each day here is difficult enough?

AP: I did say to wear a hard hat! "Not everything" is not the same as "nothing", of course, but I think there's an emotional complexity to that poem that belies the surface simplicity. Those lines are about investing the speaker with a dignity we can ignore all too easily in our seemingly more sophisticated culture. For that character, there's a lot going on under the surface, some of which comes out in the dream he recounts in the poem.

AS: "In Answer to the Question" provides a numbered list of sentences and sentence fragments. I enjoy the oblique connections between the parts, but am I supposed to be able to make the same connections you intended?

AP: There is a question to which all those lines are oblique answers, very oblique in some cases. It was part of a writing exercise on an Arvon course I attended back in 2003. However, I think the poem has grown away from that initial impulse to an extent. Every reader brings to the poem — any poem — their own experiences and understanding, so they might well make connections other than the ones I initially intended. I'm comfortable with that, especially in relation to a somewhat cryptic list poem such as that one.

AP: Yes, I can see why that would be so. To my mind, "In Question to the Answers?" is, in a sense, less coherent in that the play with language, rather than a programme imposed from outside, is the driving force. It may not be programmatic in the way that "In Answer to the Question" is, but I certainly feel it to be trying to express something — ettling at something, as we say in Scots — something about unease and fear, primarily. Perhaps the underlying inchoateness of what it's saying also enacts the nature of that unease and fear.
Posted by Andrew Shields at 8:24 AM No comments: 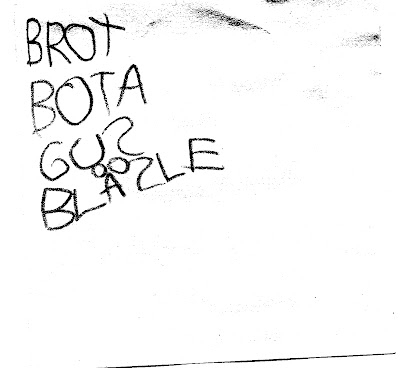 Luisa (5) wrote this shopping list the other day. It's in lovely phonetic German and English:

Luisa, Sara, and I were in the pool at my sister Sara's house in Massachusetts, and we'd all been chattering away in English for a while (which does not go without saying in my daughters' cases, as they both are quite happy to talk German to me when I talk English to them), and Sara suddenly said:

Hysterical laughter on her father and her sister's parts!
Posted by Andrew Shields at 12:41 AM 5 comments:

The lines that made me think of my Dad today, while driving to the supermarket.

On the video below, the song starts about two minutes in.

Posted by Andrew Shields at 9:15 PM No comments:

Three bands that many people may not associate with each other, but I love 'em all, because they all write great songs.


Posted by Andrew Shields at 9:07 PM No comments:

At the Discovery Museum in Acton, MA, today:

[As I like to do, I googled to find out who Erwin is. He has something to do with LEGO!]

On the road on the way there and back:

Whistles not blown. [Before a train crossing.]

Not a sign, but what Andrea said as we were trying to get the kids organized to leave the museum:

"We never get anywhere, and when we are somewhere, we never get back from there."
Posted by Andrew Shields at 9:54 PM 1 comment: