I don't think I've ever read a Stephen Dunn poem before that I really, truly liked (and many of them I really, truly dislike)—but I like this one, from the August 24, 2009, issue of The New Yorker: "If a Clown."

Ordinarily, I don't like poems that overflow with questions like this, but here, the shift to the kid at the end gives the poem the extra propulsion it needs to lift off.
Posted by Andrew Shields at 5:19 PM 3 comments:

The 7th Basel Poetry Festival will take place on September 5 and 6 at the Literaturhaus Basel. It includes readings by Peter Waterhouse and Ron Winkler, among others, and the awarding of the Basel Lyrikpreis. The full program is here.
Posted by Andrew Shields at 6:26 AM No comments: 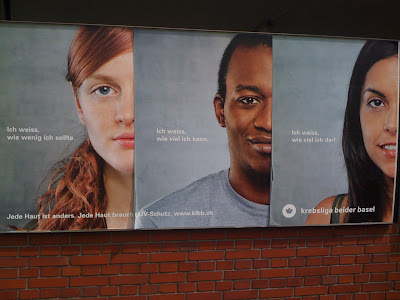 This poster is an ad campaign in Basel to get people to use sunscreen. It's also a lesson German modal verbs:

"I know how little I should."


By the way, I noticed that people generally say "sunscreen" these days, rather than "suntan lotion," as people said when I was growing up in the 70s. A sign that the reason to use the stuff has changed ...

Jazz artists I have heard live

So my concert list was just about pop-rock-folk-reggae-country-bluegrass bands. Here's a list of jazz artists I have heard:

I'm sure I'm forgetting at least a couple of dozen more (sidemen for the above at least), but that'll do as my second bit of self-exposure.
Posted by Andrew Shields at 10:01 AM 1 comment:

Email ThisBlogThis!Share to TwitterShare to FacebookShare to Pinterest
Labels: jazz, music, my life

So there have been some lists being posted in various places about concerts you've attended. Here's my contribution to this bit of self-exposure.

Then I'll add in local bands in places I have lived (and post a separate list of jazz artists I have heard):

Email ThisBlogThis!Share to TwitterShare to FacebookShare to Pinterest
Labels: music, my life

Somewhere (where? I don't remember, and my internet searches have not been successful; perhaps in his diaries?), Franz Kafka wrote that it is only our moments of idleness that count.

That crossed my mind when I started re-reading Mark Rowlands's The Philosopher and the Wolf and noticed the clear statement of the book's thesis that appears at the end of the acknowledgments: "... it is only our defiance that redeems us."

When I first read the book, I even read the acknowledgments, but the thesis did not jump out at me—perhaps because it is only the whole book that makes it seem like a general statement, and not Rowlands's own peculiar take on things.

But which is it that redeems us: idleness or defiance?
Posted by Andrew Shields at 5:55 AM 3 comments:

Here's the song going through my head today (my 45th birthday):

A wonderful view of Richard Thompson's fingers as he plays one of his most brilliant songs:

The Philosopher and the Wolf

I'm reading The Philosopher and the Wolf, by Mark Rowlands. A truly exhilarating book, sort of a cross between J. M. Coetzee on animals and Nietzsche's Genealogy of Morals. I'll probably say something more explicit about it later, but right now I am reading it with the Cartesian approach: read it first like a novel, then read it again and start really thinking about it. (For the full description of his reading method, see the end of my post from February about Descartes.)
Posted by Andrew Shields at 2:44 PM 2 comments:

It's amazing how vivid a 30-plus-year-old memory of something I read can be:

Laura put her tongue quickly to a little bit of the white snow that lay in a fold of his sleeve. It was nothing but wet on her tongue, like any snow. She was glad that nobody had seen her taste it.

What was even more remarkable about my memory of this passage from Laura Ingalls Wilder's Little House in the Big Woods, which I have been reading to Miles and (mostly) to Luisa bit by bit over the past few weeks, is that I felt it coming: as the passage came closer, I knew that something was about to be described that I had been fascinated by as a child, even though I had never thought of it in the meantime.
Posted by Andrew Shields at 9:33 PM 2 comments:

I saw Roy Nathanson's book Subway Moon in the "new arrivals" list on Poetry Daily, and as I am a fan of his music, I thought I'd check out his poetry. It's a beautifully done book (apart from the sans serif font), with lots of photos, and the poems are worth a look, especially if you're into a more relaxed, "improvisational" free verse. But the prose piece at the end is what really moved me, a recollection of Roy's father in the nursing home, still (or again) playing his sax, all the old beautiful tunes he used to play in all-white bands in the 20s and 30s. (It hit close to home, as my father recently moved into assisted living.)

What I did not know until I just did a search for Subway Moon is that it is also a CD.

I know of a few rock and pop and folk musicians who also publish poetry, but Nathanson is the first jazz musician I've come across who does. Or have I missed someone?
Posted by Andrew Shields at 7:42 PM No comments:

Posted by Andrew Shields at 9:42 AM No comments:

Miles on his favorite bands

While we were on vacation in the U.S., Miles told someone about his favorite bands: The Who for something violent, XTC for something cool, and Phish for something beautiful.
Posted by Andrew Shields at 4:55 PM No comments:

Email ThisBlogThis!Share to TwitterShare to FacebookShare to Pinterest
Labels: music, my children, Phish, The Who, XTC

Why should poets try to find a "voice" when there are so many voices in our heads? And mostly it is the welter of other people's voices that speaks to us most truly. (Insert Borges reference here.) Something overheard in a bar, something murmured and misunderstood, something someone didn't mean to say. — Just a few thoughts after re-reading this poem, "Voices," (the first of the two at the link). It's from Rob A. Mackenzie's The Opposite of Cabbage.

(And once you've read it, too, get yourself a copy of Rob's book here!)
Posted by Andrew Shields at 4:48 PM No comments:

Like all men who think, I struggle
against my nature.

The enjambment gives this an extra twist, allowing for two readings of Kepler's struggle, one general, the second a more specific "struggle / against my nature."

But I disagree with the more specific reading: for me, thinking can be a struggle, but not one "against my nature"!

Keithley does not leave it at that, of course. Here's the whole sixth "fragment":

Like all men who think, I struggle
against my nature. Wherein
I acknowledge what I hear
or dream is but the ghost
of those heavenly harmonics
that move the mind to dance:
Why not, then, call it music
and admit our souls are lost?

I struggle to think about those lines, about how to comment on them—but I don't struggle to feel them.

(Still, "just because you feel it doesn't mean it's there," as the Radiohead song goes ...)
Posted by Andrew Shields at 2:52 PM 1 comment:

What the Mind's Eye Sees

In Der fliegende Berg, Christoph Ransmayr juxtaposes two different ways of looking at the things of this world:

A crow can be just a clever bird as well as a messenger from heaven; the morning light on a ridge can tell you where the sun is and also be the blinking of a God; a field of snow in the moonlight can be a silver gate in the cliffs or, "in truth?", just snow from last year. (See here for a discussion of this passage in German.)

For the narrator's brother Liam, only one of these perspectives is valid, while Ransmayr's Tibetan nomads are able to accept both of them at the same time.

George Keithley's The Starry Messenger, his sequence of poems about Galileo Galilei, makes clear, in the poem "What the Mind's Eye Sees," that Liam's perspective can be called "scientific." Keithley's Galileo determines what the Milky Way is (a huge swathe of invididual stars) to the exclusion of other understandings of it:

He reports the Milky Way is not a vaporous river.
Nor is it a stream of milk from Hera's breast.

Nor is it the spine of the sky—the pale backbone
of the black beast whose belly is our home.

Nor is it the ancient route of a raven's flight
through a night of snow.

Nor is it the path of souls descending from heaven to earth.
Nor the spirits of the dead departing to the other world.

The relationship between words and music is something I ponder often, as someone who writes both poems and songs. John Gallaher wrote sometime on his blog that "poetry is as good as music," and of course I agree. Here's the beginning of #26 in Adam Fieled's prose-poem sequence Chimes, capturing beautifully how the words associated with music can provide motivation for hearing words on their own as an art form:

Through music, words emerged in my consciousness as another thing. There were musicians who used words and they showed me. I saw that combinations of words could be molten and that the fires they ignited could be contagious. They could be a door that one could break through into another reality: a place hyper-real, full of things that had the palpable reality of what is called real, but were nonetheless better than real: voices channeled from ether, expounding heroic worlds of oceanic expansive experience.

Songs that did that for me when I was in my early teens: Bob Seger, "Turn the Page" (though I never owned it); Aerosmith, "Dream On"; Queen, "Bohemian Rhapsody"; Dire Straits, "In the Gallery" (starting to move away from singles here!); Steely Dan, "Home at Last." I'd say it's when I started getting more into the last two that I began to move from pop to poetry.
Posted by Andrew Shields at 9:20 AM No comments: