Tom Phillips has just published a really nice short essay on the Violent Femmes over at Eyewear, and it made me remember my one VF concert. It was at the Waldbühne in Berlin in the summer of 1992, and the show opened with Lyle Lovett knocking me out with his wonderful "Church":

I went to church last Sunday, so I could sing and pray,
and something quite unusual happened on that day.

Then came Bonnie Raitt, and then the Femmes. I don't remember their set very well, but I remember being very impressed by their energy and power; as when I saw REM a few years earlier, I was surprised by how much "harder" their sound was live than in the studio.

The highlight was in Lou Reed's set, when he brought out Bonnie Raitt and the Femmes' Gordon Gano to be the "colored girls" on "Walk on the Wild Side," and then he let Gordon sing the second verse. But before he began singing, Gordon said, in pretty good German, "Erst möchte ich sagen: Lou Reed, er ist geil, ja?" ("First just let me say: Lou Reed, he's cool, isn't he?") And then Gordon sang that second verse, and it was a shock to hear Lou's half-talking, half-singing replaced by the beautiful voice of a former choir boy.

Posted by Andrew Shields at 12:29 PM No comments:

I like the effect here: in a discussion of the word "operandum" and its use by B. F. Skinner, Mark Liberman brings up a Wallace Stevens poem that contains the word and imagines Skinner and Stevens "getting together of an evening to swap neologisms." (I like that use of "of an evening," too.)

(Perhaps this little note will get one of my Stevensians to comment on Liberman's post.)
Posted by Andrew Shields at 9:22 AM No comments:

Here's another one I first read on the Poetry Daily app on the iPhone: a dizzying poem about a huge flock of swifts, "The Swifts," by Linda Bierds. Yet another great poem from the New England Review!

One August night, ten thousand.
Four thousand now, in this long, September dusk.
Some repeaters, staying over.
Posted by Andrew Shields at 11:06 PM No comments:

the twin towers shown
as an establishing shot
saddens many films

There's something to be said for capturing something in words that others might already have noticed but never quite fully registered.

I first read the poem on PD's new iPhone app, which is excellent.

Poetry-wise on the iPhone, I've also been enjoying Poem Flow and the Poetry Foundation's new app.
Posted by Andrew Shields at 10:59 PM 1 comment:

Everybody thinks that the only issue in Group G is whether Brazil or Portugal will be in first place after the games this afternoon. But here are the standings:

Yes, it's unlikely that the standings will change much, but given how helpless North Korea was against Portugal, and given how explosive the Ivory Coast can be, and given that the last time Brazil and Portugal played, Brazil won 6-2, it would not be completely and utterly miraculous (it would not be like a fifth set in tennis that goes to 70-68!) for the Ivory Coast to still qualify.

Let's say Brazil beats Portugal 3-0 (which is not an extreme result). Then the Ivory Coast has to win 6-0 (which is extreme, but as I said, not utterly unlikely, given NK's weakness and IC's offensive potential). That would put IC and P in a tie, and they would have to draw lots. So any nine-goal swing, with B and IC winning, makes it possible for IC to advance (7-1 for IC and 3-0 for Brazil would have IC advancing on goals scored, for example).

I do not, repeat DO NOT, think this is what's going to happen, but I thought I'd go on the record with it, just in case it does happen, so that I can pat myself on the back about it. :-)
Posted by Andrew Shields at 11:01 AM No comments:

Here's a line that quickly characterizes someone:

... he always chooses his luck and clothes one size too small for him.

The whole poem, "Vertical Realities," by Luljeta Lleshanaku (translated by Henry Israeli and Shpresa Qatipi), has this sense of how the barest of brushstrokes can imply a world. The collection Child of Nature is available from New Directions.
Posted by Andrew Shields at 10:52 AM No comments:

Claudia Roth Pierpont's "Black, Brown, and Beige" is a review of several recent books about Duke Ellington, but it concludes with an image of Charles Mingus that brought tears to my eyes:

Two years before Ellington died, in 1972, Yale University held a gathering of leading black jazz musicians in order to raise money for a department of African-American music. Aside from Ellington, the musicians who came for three days of concerts, jam sessions, and workshops included Eubie Blake, Noble Sissle, Dizzy Gillespie, Charles Mingus, Max Roach, Mary Lou Williams, and Willie (the Lion) Smith. During a performance by a Gillespie-led sextet, someone evidently unhappy with this presence on campus called in a bomb threat. The police attempted to clear the building, but Mingus refused to leave, urging the officers to get all the others out but adamantly remaining onstage with his bass. “Racism planted that bomb, but racism ain’t strong enough to kill this music,” he was heard telling the police captain. (And very few people successfully argued with Mingus.) “If I’m going to die, I’m ready. But I’m going out playing ‘Sophisticated Lady.’ ” Once outside, Gillespie and his group set up again. But coming from inside was the sound of Mingus intently playing Ellington’s dreamy thirties hit, which, that day, became a protest song, as the performance just kept going on and on and getting hotter. In the street, Ellington stood in the waiting crowd just beyond the theatre’s open doors, smiling.

Who else but Mingus would have come up with an act like that? Well, maybe Charlie Haden, who dedicated "Song for Che" to freedom fighters in Angola and Mozambique while performing in Lisbon in 1971. See here for his version of the story.
Posted by Andrew Shields at 10:42 AM No comments:

Astonishing Confidence in the Self

In Mark Lilla's recent article on the Tea Partiers in the New York Review of Books, he comes up with one of his wonderful summations of a situation:

The new Jacobins have two classic American traits that have grown much more pronounced in recent decades: blanket distrust of institutions and an astonishing—and unwarranted—confidence in the self. They are apocalyptic pessimists about public life and childlike optimists swaddled in self-esteem when it comes to their own powers.

But I would add that these "new Jacobins" are not just American, as I have seen the same combination of public pessimism and private optimism in Switzerland as well. Many Swiss are just as skeptical of public institutions as Americans are (especially of what they call "Schulmedizin," that is, mainstream medicine) and just as optimistic about their own perceptions of the world ("the homeopathic treatment worked for me"). So while Lilla has perhaps correctly diagnosed the Tea Partiers here, he has limited the scope of his observation too much: what he identifies as "classic American traits" may once have been uniquely or at least especially American, but they have gone global as well—or at least Swiss. (Or does this have something to do with democracy?)

Perhaps someone will say, "Well, Andrew, what about your own 'astonishing confidence' in yourself?" But I am not skeptical about public institutions, and I try to understand my own experience as anecdotal (no matter how fun or funny the anecdotes are) and not representative of how people are and how the world is.
Posted by Andrew Shields at 10:18 AM No comments:

I See the Sea 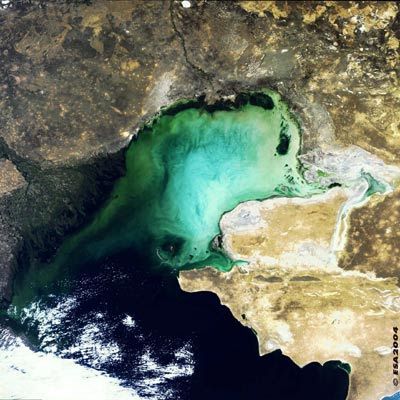 I see
the sea
shrink,
then shrink again,
and I
float farther
from the invisible shore.

The shrinking of the Caspian Sea ... although the page I found the satellite photo on says the following:

Along with increasing pollution, the Caspian Sea has also seen its water level fluctuate in past decades, at least partly due to human activity. As dams were constructed on rivers feeding the Sea its water level fell during the 1960s and 1970s, leading to construction on newly exposed shorelines. But since the late 1970s the water level began to rise again and has now risen by around 2.5 metres. Today it has stabilised and may even be falling again.
Posted by Andrew Shields at 6:23 PM No comments:

The winner of the final round of my sixth Daily Poem Project is Winter's Tale, by Maxine Kumin, which received 9 votes out of 44 cast.

Adjectives of Order, by Alexandra Teague, came in second with 8 votes, while Trick, by Sam Willetts, and Ecclesiastes, by Khaled Mattawa, tied for third with 6 votes each. All 12 poems received at least one vote.

I would like to thank everyone who participated, especially those of you who took the time to vote almost every week!

The winners of the first five Daily Poem Projects: