On Bob Dylan the Poet

Martin Schäfer and I were interviewed by Eric Facon for Swiss Radio DRS2 in honor of Bob Dylan's birthday. You can listen to the interview here (in German).
Posted by Andrew Shields at 9:23 PM No comments:

ESP and The Basel Irish Club

AN EVENING OF FICTION, POETRY, AND MUSIC

Sponsored by the Basel Irish Club 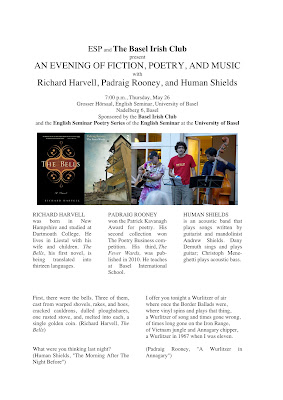 Posted by Andrew Shields at 3:14 PM No comments:

Theories of the Mainstream

From the inside of the political mainstream, radicals appear in need of explanation, but the inside is that which does not need to be explained. A generation later, the old mainstream does require explanation, and hence theory and historical analysis. As a result, the contemporary mainstream can be quite critical of its historical antecedents, but the idea of turning such critiques upon itself remains unthinkable.

This can also be applied to poetry: the contemporary mainstream reads the Modernists, not the poets who were the mainstream back then.

[Revised version of comments on this post by John Gallaher.]
Posted by Andrew Shields at 9:47 PM 1 comment:

Part of the Ritual

I remember a Stanford professor (Mark Mancall) asking a roomful of freshmen if we were nervous about the exam the next day. (The course was the wonderfully titled "Structured Liberal Education," SLE for short; the students in it all lived in the same dormitory, and we were all a little bit crazy.)

So he asked us if were nervous about the exam, our first in the course.

The Quarry and the Lot

"Maybe writing is a hobby, you know? I might as well build shelves or go fishing."

So says Luke Owen, a poet and community-college teacher who is one of the four narrators of Mark Wallace's novel The Quarry and the Lot. He clearly uses the idea that writing might be a "hobby" as a negative point: "hobbies" are merely (to quote a definition) "something that one likes to do or study in one's spare time" and are of little importance to anyone else; a further definition at the same link says that a hobby is "engaged in primarily for pleasure." And Luke would not be writing just for his own pleasure.

Yet I have been pondering for quite a while the idea that considering writing a hobby might be a good idea. The rest of the first definition of hobby that I quoted above adds that a hobby is a "favorite pastime or avocation"—and it's the word "avocation" that is interesting here. One sense of the shorter word "vocation" is that of a calling, as to the priesthood, and that is, of course, what writers like to think of their writing as. A "vocation" is something serious; an "avocation" is apparently less serious.

But if I play briefly with the idea that Luke Owen is a real person, I'd have to conclude that he would find the idea of writing as a "vocation" in a spiritual sense ridiculous—I don't think he ever makes any explicitly anti-spiritual remarks, but his great skepticism about so many things (especially the suburbs he grew up in) would surely apply to such an idea as well. But if such a writer cannot see his writing as a "vocation," then what's left but to consider it an "avocation"—a "hobby."

But that would make it as apparently insignificant (from Luke's perspective) as "building shelves or going fishing." My immediate thought is to wonder what's wrong with either of those activities (and Nick, one of the novel's other narrators, does in fact run a furniture and carpentry shop he inherited from his father). It reminds me of my recent post about ham radio and hardcore. And in fact, in the novel, when Luke was first active in poetry in the DC area, he was also part of the hardcore scene, which suggests that he would see hardcore (if he were a musician rather than a writer) as something worthwhile that is more than "just a hobby."

Near the end of the novel, Luke has shifted ground on this issue. In a discussion with his father, he surprises his father by using the word "duty" ("I've never heard you use the word duty before") in a reference to "the duty of the artist." He explains what that duty is: "To keep doing what you're doing and let other people know." It's the second phrase there that makes "artistic" work (slightly) "more than just a hobby": you let other people know what you're doing not because you want to sell them shelves or go fishing with them or exchange codes on your shortwave radio, but because you want to communicate with them.

And in this sense, I'm grateful to Mark Wallace, because he "kept doing what he does" and also "let other people know" by publishing his book. There's much more to it than just Luke's crisis as a writer, and I recommend it wholeheartedly to ... well, to anyone whose hobby is to read thought-provoking novels.
Posted by Andrew Shields at 10:27 PM 3 comments:

Tonight, I conducted an operation that was darkened by the history of cloudless black smoke from the actions of heartbreak. And yet the world at the dinner table forced our hearts where we came from, what God prayed to what family to protect our justice that attacks innocents to protect years of professionals in defense. In the government safe haven the globe worked to kill scores, including a part of the capture across the border to operate its affiliates so shortly after I directed the director to make the bin the top against our broader network. Years of intelligence lead to it, and many months to run this national possibility that located a compound inside last week, determined enough to take action to get him to my direction, the targeted compound in a small team carried out the operation with no care to avoid a firefight, they killed custody for over two decades, and continued our death the most significant achievement in our nation’s defeat. Yet his effort will pursue us and we will remain as we do, we must not be at war made clear, just as after our war a leader of slaughtered countries, including our demise in peace and human dignity. Over the years, I’ve made clear that Pakistan knew where that is done but our cooperation with the compound was war against Pakistan and the Pakistani President, and my counterparts agree that this is essential that affiliates did not choose our shores with the senseless citizens of service and the costs of efforts on time as a letter to a loved one the eyes of a member who Americans never tolerate being idly killed. We will be relentless to the values that make nights like families who have terror. Tonight, the intelligence worked tirelessly to not see their names feel the satisfaction of their pursuit. We give this operation the unparalleled country of the heaviest September. Finally, let the families who have wavered in whatever it takes to attack our sense that it has frayed yet a testament to the determination of the cause of our complete mind. That is the history of prosperity our people struggle to stand for sacrifices to make the place remember that these things wealth or power, are God, liberty and justice all bless God.
Posted by Andrew Shields at 10:07 PM No comments: