So did Muldoon make it to number one on Amazon?
Posted by Andrew Shields at 11:59 AM No comments:

Against Naturism; If I Had Known

Roddy Lumsden's "Against Naturism" (from his collection The Book of Love) presents the case against nudism—more precisely, the case for clothes:

For me, I have to see the clothes come off:
the way a button’s thumbed through cotton cloth —
a winning move in some exotic game

with no set rules but countless permutations —
or how a summer dress falls to the floor
with momentary mass and with a plash
that stirs us briefly as we ply our passion;

For me, that summer dress's whispering fall quietly echoes Greg Brown's "If I Had Known" (from his CD "Down in There"; covered by Human Shields last Friday):

She was older than me I guess;
summer was invented for her to wear that dress.

I'd never pictured the taking off of that dress quite so explicitly until I read about it in Lumsden's poem. (Another lovely feature of the poem is the striking word "amidkiss"—as in undoing a clasp "amidkiss.")
Posted by Andrew Shields at 11:30 AM 4 comments:

Here's an animated poem by my friend Geoff Brock.

Many thanks to all the people who came to the concert! It was great to have such an attentive and friendly audience.

Photos and video and audio to follow eventually.
Posted by Andrew Shields at 9:36 AM No comments:

Email ThisBlogThis!Share to TwitterShare to FacebookShare to Pinterest
Labels: A. E. Stallings, Human Shields, my music

Human Shields in the Basler Zeitung

If you can read German, you can read this article promoting my band's first full concert tomorrow night. (Click on the image to enlarge.)
Posted by Andrew Shields at 6:47 AM No comments:

Email ThisBlogThis!Share to TwitterShare to FacebookShare to Pinterest
Labels: Human Shields, my music

Yes, the worst terrorist attack in our history was perpetrated by a foreign conspiracy. But the second worst, the Oklahoma City bombing, was perpetrated by an all-American lunatic. Politicians and media organizations wind up such people at their, and our, peril.

If we're going to have laws that define certain crimes as terrorism and hence worthy of more serious punishment, then we should apply them to American terrorists of the right. As Lindsay Beyerstein suggests, Operation Rescue might well be a terrorist organization according to the terms of the Patriot Act and other recent laws:

The feds will probably stop short of investigating Tiller's murder as a terrorist attack. That designation would unleash vast federal powers to investigate large swathes of the radical anti-choice movement and hold accountable anyone who gives them the slightest aid and comfort. The feds are simply not prepared for the political fallout that would ensue if, say, Operation Rescue were officially designated as a terrorist organization.
Posted by Andrew Shields at 11:01 AM No comments:

The thing about privilege is that if you have it, you might not even realize it. It's not something you have to actively seek in order to benefit from--most of the time it just happens. There might not even be any conscious intent on the part of the person extending the privilege--it's just an after-effect of a society where white-maleness has been privileged for so long that it feels natural to both extend and receive it.
Posted by Andrew Shields at 10:12 AM 1 comment:

Celan's Mandelstam through Joris and Shields

Pierre Joris posted his translation of Paul Celan's translation of a Mandelstam poem. I added my version of the same poem as a comment to his post. A great poem refracted through three languages!
Posted by Andrew Shields at 10:07 AM No comments: 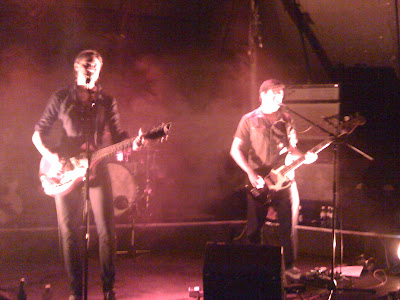 Leonti played a brilliant concert last night at the Kuppel in Basel, celebrating the release of "Everyone/I". Get yourself a copy of this brilliant recording! (Full disclosure: I wrote two of the lyrics.)
Posted by Andrew Shields at 5:03 PM No comments:

At first, it struck me how young they all look here, even in comparison to the Stop Making Sense movie a few years later. But then I checked their dates on Wikipedia, and they were all in their late twenties even when this was recorded.

Talking Heads: still one of the best bands I have ever seen live!

Posted by Andrew Shields at 9:46 AM 2 comments:

My friend Don Brown on War and Peace: "What makes Tolstoy the lord of realist fiction is that he knows that what 'everyone' feels is what convention dictates they feel, but that what each individual feels is what their own natures dictate."

I've been looking at War and Peace as my epic for this summer (after the Aeneid last summer), and Don happens to be reading it, too, which definitely makes me much more likely to choose it!
Posted by Andrew Shields at 10:18 PM 5 comments:

I ordered three books!
Posted by Andrew Shields at 4:06 PM No comments:

After Rafael Nadal lost at the French Open yesterday, I talked with several people who dismissed Tommy Haas as a potential threat to Roger Federer in their match today. In third set, though, the score was 6-7, 5-7, 3-4, 30-40 on Federer's serve, Haas had a break point to serve for the match, and I was thinking, "See, Haas is a dangerous, canny veteran!"

On that break point, Federer ran around a backhand and drilled a crosscourt forehand, a shot he'd been missing all day—but this one went in, and Federer proceeded to win the next nine games, and then the match in the fifth set: 6-7, 5-7, 6-4, 6-0, 6-2.

While searching for something else, I came across this great eggcorn that I had never seen before: per say. 419,000 hits on Google, so it's a pretty common one. See the Eggcorn Database entry.

(If you haven't come across the expression "eggcorn" before, see the Wiki page.)
Posted by Andrew Shields at 11:49 AM 2 comments: