"Then you get another guy"

In the "Talk of the Town" section of the November 7, 2011, issue of The New Yorker, there's a description of the singer Gillian Welch and her guitarist David Rawlings driving from Philadelphia to New York. The article is not available on-line (except for subscribers to the magazine or the magazine's archive); here's the bit I noted:

The other thing that Rawlings had brought to divert himself was a collected works of Shakespeare. "I've been reading the histories," he said. "I'm up to the third act of 'Henry V,' and when I'm done I might even start them again. I like how fatalistic they are. They feel a little like the Iliad and the Odyssey. I like it in the Iliad when Homer introduces a warrior and says who he was and where he grew up and who his parents and his grandparents were and what they did, and then Hector disembowels him. Then you get another guy."

I love a guitarist who reads Shakespeare on the road and compares the plays to Homer, with superb comic timing in the next-to-last sentence of the passage. What would it mean to play guitar like this, with a flurry of information and then a comic twist?

Since I'd not only read that passage but also read it out loud to my son Miles (who was not as amused as I was ...), it was striking to find the same point made in a different article in the same issue: "Battle Lines," Daniel Mendelsohn's review of Stephen Mitchell's new translation of the Iliad, which begins like this (also only in the on-line archive):

For sheer weirdness, it would be hard to find a passage in the Western canon that can compete with the tenth book of Homer's Iliad—the one classicists call the Doloneia, "the bit about Dolon." Not the least of the book's oddities is that it's named after a nobody: Dolon is a character whom the poet conjures merely so that he can kill him off, a few hundred lines later, in literature's nastiest episode of trick-or-treating.

This is not the first time I have come across such a doubling in the New Yorker. I wrote about a case a few years ago, when articles by Malcolm Gladwell and Caleb Crain referred to the same thing in consecutive issues. And in April of 2006, I also wrote about two profiles in the same issue (of Pete Seeger and Maurice Sendak), which both included images of the profiled celebrity interacting with a famous poet (Seeger with Edna St. Vincent Millay and Sendak with Marianne Moore). Amusingly, the Seeger profile is by Alec Wilkinson, who also wrote the bit about Welch and Rawlings.
Posted by Andrew Shields at 3:17 PM 1 comment:

Michael Hulse and Quinn Latimer will read from their poetry on Monday, November 21 2011, in the Grosser Hörsaal of the English Seminar of the University of Basel, at Nadelberg 6 in downtown Basel.

For more information, click on the image of the flyer below. 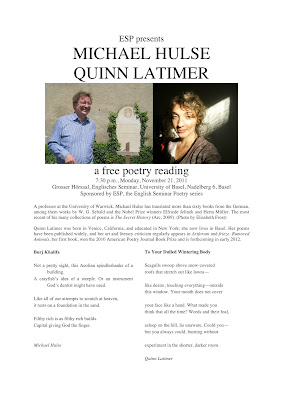 Posted by Andrew Shields at 11:34 AM No comments: