The seventh chapter of Coetzee's Elizabeth Costello is called "Eros"; in it, Elizabeth reflects on two texts, one she just read and one she remembers having read long ago: Susan Mitchell's "Erotikon (A Commentary on 'Amor and Psyche')" and Robert Duncan's "A Poem Beginning with a Line by Pindar." As part of my course on "Elizabeth Costello" and its sources, the students and I each chose a passage from Mitchell, Duncan, and Coetzee this morning and wrote a sentence about it. Here are the passages I chose, and the sentences I wrote.


Here, darkness can both be exposed to the light (when it "lifts its skirts") and still be a source of "hiddenness" in the "pleats" and "folds" of those "skirts." 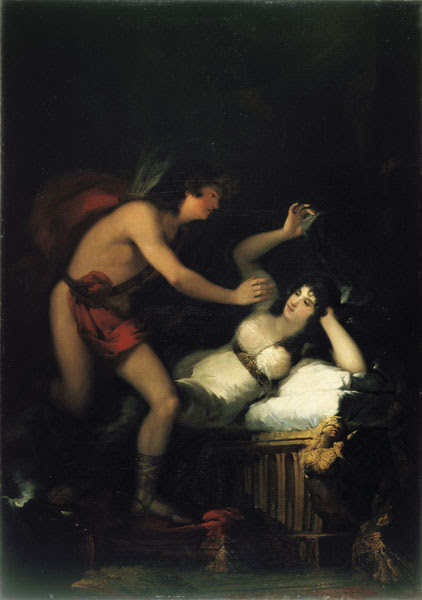 In Goya's canvas Cupid and Psyche
have a hurt voluptuous grace
bruised by redemption. The copper light
falling upon the brown boy's slight body
is carnal fate that sends the soul wailing
up from blind innocence, ensnared
by dimness
into the deprivations of desiring sight.


Here, light, as the end of "blind innocence", reveals "the brown boy's slight body," but it also creates the "snare" of "dimness", making light into a trap for those who would see by it.

Are there other modes of being besides what we call the human into which we can enter; and if there are not, what does that say about us and our limitations?


In her discussion of Thomas Nagel, Elizabeth insists that we can "enter into other modes of being" — bats, literary characters, corpses — but here, she seems to have forgotten her insistence on (or lost her belief in) the power of literature to go where philosophy cannot go.
Posted by Andrew Shields at 3:23 PM No comments: