I like a bit of comedy when I visit an art museum. Such as this picture, one of four frescoes at the National Gallery in London, Domenichino's "Apollo Killing the Cyclops," with a dwarf in the corner peaking out from behind a painted curtain, as if the fresco were a painting of a tapestry:

Or Jan van Huysum's "Flowers in a Terracotta Vase," with its wonderful detail of a fly so realistic that one could think it was a real fly that had landed on the painting: 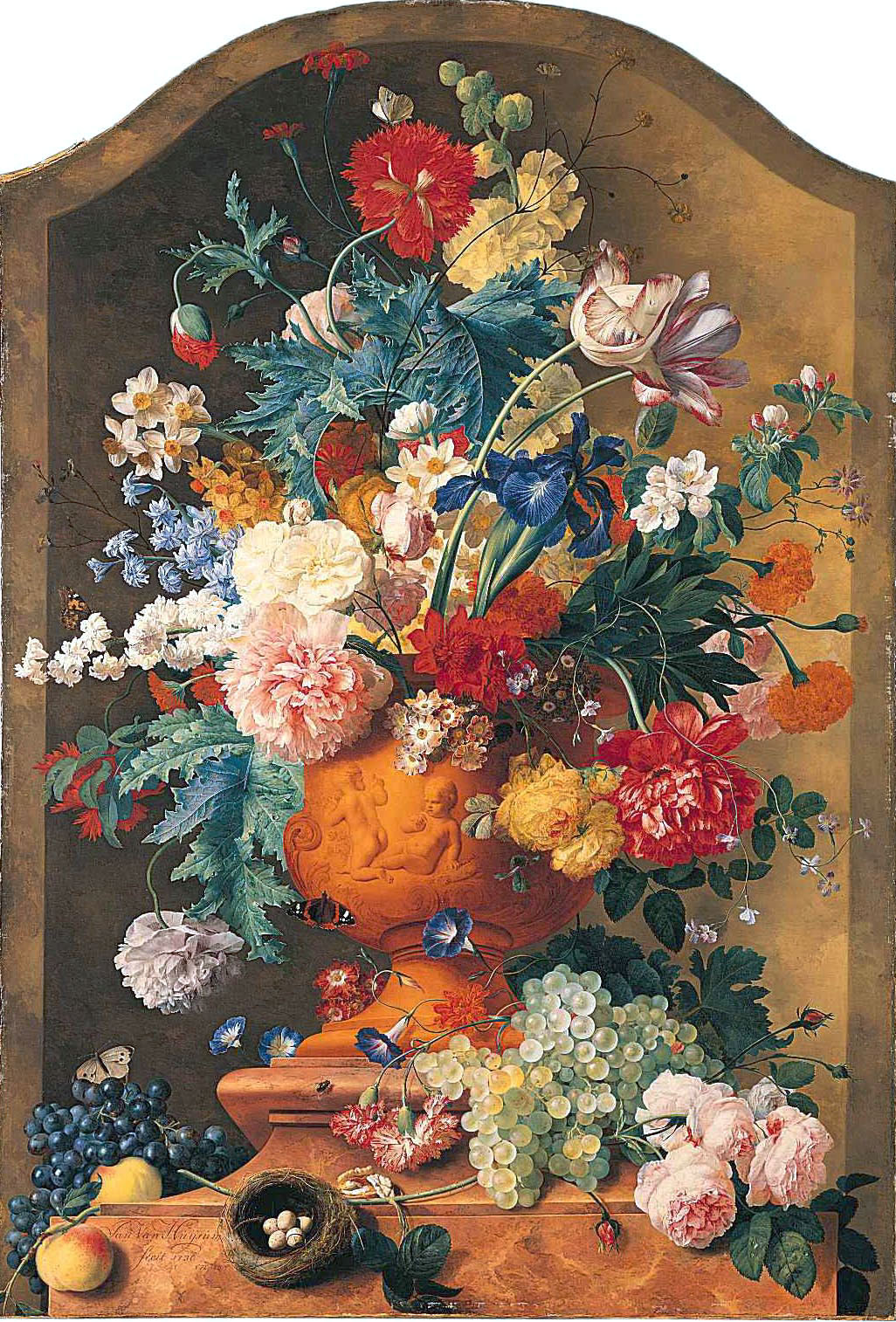 It's down on the pedestal of the vase, slightly left of center. Here's a closeup of it:

When I visited the National Gallery in London last month, I found myself fascinated by minute details in paintings. One type of detail that kept coming up was the bookmark, as in this painting by Lorenzo Lotto: 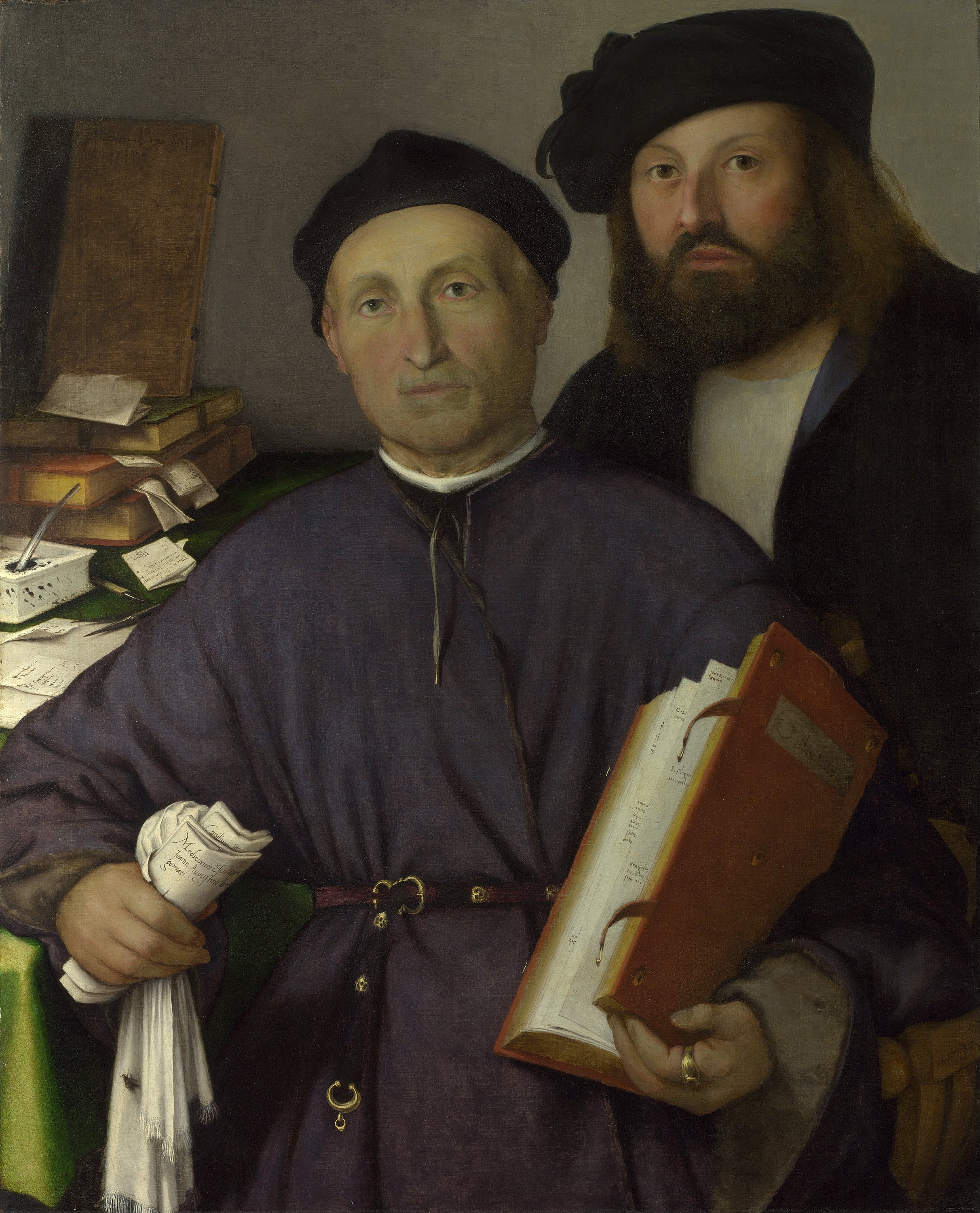 Holbein the Younger's portrait of Erasmus features not only a stunning depiction of a glass container but also another book with a bookmark in it (in the upper-right corner): 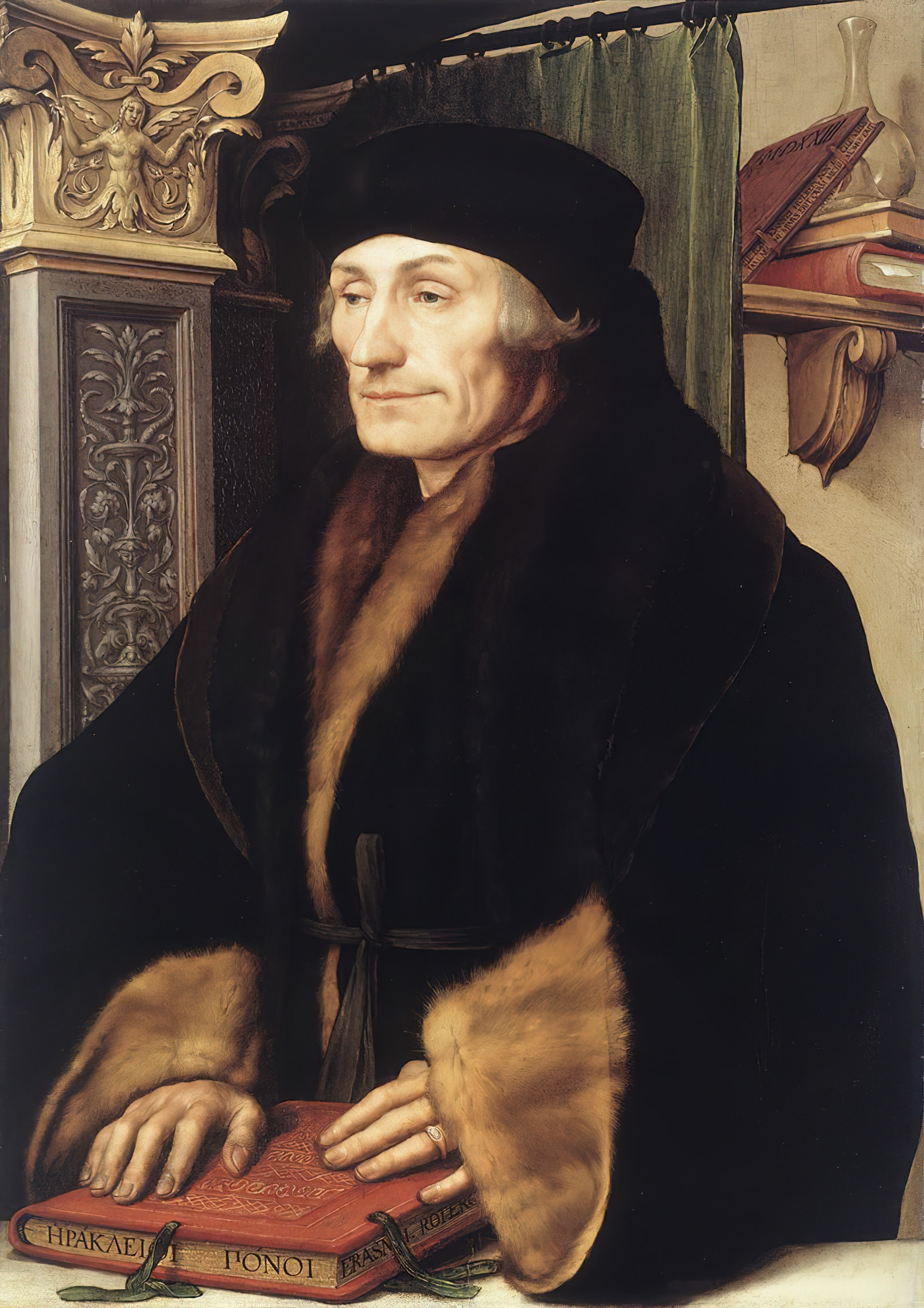 A book alone is apparently not enough to mark a figure as being a humanist (or what we would today call an intellectual?); it takes a bookmark to show that the person is an active intellectual.
Posted by Andrew Shields at 11:39 AM 1 comment:

I have two poems up at the Hobble Creek Review: "Eagle (Letter from My Aunt)" and "Rain from Cloudless Skies." Thanks to Justin Evans for publishing my poems!
Posted by Andrew Shields at 8:43 AM No comments:

Email ThisBlogThis!Share to TwitterShare to FacebookShare to Pinterest
Labels: Justin Evans, my poetry

The Lammas Hireling as poem and film


The Lammas Hireling from Paul Casey on Vimeo.


And here's the poem:

After the fair, I'd still a light heart
and a heavy purse, he struck so cheap.
And cattle doted on him: in his time
mine only dropped heifers, fat as cream.
Yields doubled. I grew fond of company
that knew when to shut up. Then one night,

disturbed from dreams of my dear late wife,
I hunted down her torn voice to his pale form.
Stock-still in the light from the dark lantern,
stark-naked but for one bloody boot of fox-trap,
I knew him a warlock, a cow with leather horns.
To go into the hare gets you muckle sorrow,

the wisdom runs, muckle care. I levelled
and blew the small hour through his heart.
The moon came out. By its yellow witness
I saw him fur over like a stone mossing.
His lovely head thinned. His top lip gathered.
His eyes rose like bread. I carried him

in a sack that grew lighter at every step
and dropped him from a bridge. There was no
splash. Now my herd's elf-shot. I don't dream
but spend my nights casting ball from half-crowns
and my days here. Bless me Father for I have sinned.
It has been an hour since my last confession.


My favorite moment in the film is at 7:10, when one of the cattle pees.
Posted by Andrew Shields at 6:05 PM No comments:

In the following paragraph from Tim Parks's novel Destiny, the narrator, Chris Burton, is in the office of one Doctor Busi, the director of a clinic where Burton's schizophrenic son Marco had been confined until his recent suicide. At the beginning of the novel, Burton and his wife (an Italian) had been in London, where they heard the news of Marco's death. The novel presents Burton's train of thought as he and his wife head back from London to Italy (where he has lived most of his adult life while working as a journalist). The paragraph is typical in its abrupt, often unmarked shifts through various levels of narration and Burton's introspection. In particular, two issues are distracting Burton from his conversation with the doctor: first, he has just learned that he had been offered a pardon for tax evasion, but the deadline has already passed; secondly, the doctor's office in the villa the clinic is in has the remains of an old fresco on the wall. At the beginning of the paragraph, Busi mentions Burton's adopted daughter Paola, whose testimony about Marco's violent behavior towards her and their mother had led him to be confined to the clinic:

Your daughter was a frequent visitor, Busi acknowledged. He had been getting round to this, he said, but it seemed important to consider the nature of the deceased first, to clarify the question of suicide. Please do sit down, Signor Burton, Dottor Busi said. You are understandably fraught. Actually, I had imagined that at this point your daughter would have told you about all this. I wasn't aware you didn't know. But it's quite straightforward. Your daughter was a frequent visitor, Signor Burton. Marco was her brother after all. However, we, the staff here, in liaison, I might say, with Dottor Vanoli, since he has a longer experience of the case than any of us, agreed with her, your daughter, and her husband, that it would be best not to let you know of these visits, since it was felt your wife might intervene in some way. She might not approve. I sat down. Paola hadn't said a word. She was hiding things from me. I had been offered a pardon, I thought. A pardon! But the deadline has lapsed. We were concerned about your wife's reaction. I watched Busi speak. I face prosecution. The fresco must have been one of those jumbled crowd scenes where a saint is martyred. There was a head by the doctor's left shoulder. A woman's hand, a man's head. Will they pursue me if I return to England? Then on three occasions recently, Busi said, when we felt Marco was stable enough, we allowed him a day out with your daughter, if and only if accompanied by her husband, of course. I stared at the supine head. As I said, we agreed that these outings would be strictly confidential as it was clear that given the animosity between various members of the family this development might upset someone, Marco's mother in particular, and perhaps prompt her to intervene in some way, or even to return to Italy before the experiment of your absence had been properly explored. It was impossible to say whether it had been severed. Our assessment was that that experiment was yielding results. In particular, I should say -- perhaps it was just the broken surface of the fresco -- your daughter was concerned that your wife would feel that in taking Marco out she was deliberately exposing him to situations which would put her in a position to make false accusations that he had assaulted her. How real that convoluted worry was, I don't know, but under the circumstances and given what happened in the past I felt it wise to accept your daughter's request for confidentiality. (pp. 172-173)

"The broken surface of the fresco" includes a man's "supine head," but it is "impossible to say whether it had been severed." The fragment of the fresco that is left does imply something about the fresco as a whole ("must have been one of those jumbled crowd scenes where a saint is martyred"), but the part cannot be taken as standing for the whole. The "severed head" becomes a figure of the impossibilitiy of metonmyic reading, in which the interpretation of part of a work allows one to draw conclusions about the whole of a work. This paragraph, then, cannot stand for the whole of Destiny. The metonymic reading of details cannot provide a reading of the book as a whole. In its attempt to use individual details of the work to stand for the whole, close reading must fail.

This is reinforced by the paragraph's emphasis on the clinical interpretation of the schizophrenic. Just as Burton cannot draw conclusions about the fresco on the basis of the "severed head," Busi can only speculate about his patient, Burton's son Marco. The symptoms of schizophrenia represent tantalizing fragments that imply the whole "scene" without actually fully presenting that scene.

The paragraph's overall structure confirms this. The juxtaposition of details from the dialogue with the details of Burton's thoughts also creates a metonmy that leads one to read from the part to the whole: the details interact suggestively as if they might belong together after all. The problem of Destiny is finally not that there are too few details in a "broken" fresco but that there are too many details. It is the surplus of detail, not the lack of detail, that prevents close reading of selected individual details. The diagnosis of schizophrenia through a reading of a set of fragmentary symptoms (of "severed heads," as it were) may be subject to the critique of interpretation figured in Burton's distracted comments on what is left of the fresco, but the novel as a whole is not.

A metonymic reading of a fragment, then, can only follow convention, what one expects to be the case ("must have been one of those jumbled crowd scenes"). But the problem of a metonymic reading of a complete work lies elsewhere, in the excess of detail that could be drawn into an interpretation, and in the necessary contextualization of those details in paraphrases like the one that began this discussion.
Posted by Andrew Shields at 8:36 AM No comments: