In addition to my poetry book, I have also just published an album with my band Human Shields, "Somebody's Hometown." The title of the album comes from the first line of one of the songs, "Alisa's Bridge": "On the streets of somebody's hometown."

The album is available here on Bandcamp, where you can stream it for free or buy it as a download. Whoever wants a CD should contact me personally.

Here are Don Brown's liner notes about the album:

What are songs for?  Are they simply hummable ditties to alleviate or enhance a mood, or are they little tales that captivate us with their implications?
On "Somebody’s Hometown", Human Shields invest songwriting with the poetic, philosophical, and storytelling content found in the work of the best songwriters.  Like the oldest forms—those found in the folksongs of almost any culture—the songs on this collection take lyrics seriously.   From songs that play off familiar poetic figures—the birds in “Land Without Nightingales,” to the burning tiger (or tyger) in “Rumpus”—to songs that evoke folkloric content—the pale rider, the pirate, the face cards—to songs relevant to our times—“Abottabad”—to songs that engage with a philosophical outlook—“Better Never Than Late,” “You Know I Know”—the songs of Somebody’s Hometown repay attention to lyrics that far too few songwriters can command.
That’s not to say you can get all the value from this disc by reading the lyric sheet.  Not by a long shot.  The songs themselves partake of many aspects of folk music, but crossed with jazz and rock and other forms that best suit the song.  When “Abottabad” begins, we could be listening to someone singing about life in any year of the modern period.  As the sound begins to blend into what might be a cry-in-your-beer confession, we come to something closer to home, passing through a hint of Country  to attest to an American moment.  Or consider the Violent Femmes-like strum of “Rumpus,” or the complex solo in “Sundowning,” or the vocals late in “You Know I Know” where a Tim Buckley-like impassioned abandon comes into play.  Everywhere there are echoes, hints, suggestions of the musical background that gives the work of Human Shields its rich context.
The songs on this disc are stately, thoughtful, varied, surprising.  The simple instrumentation of Andrew Shields, Dany Demuth, and Christoph Meneghetti articulates the songs’ structures with fascinating clarity, and Demuth’s vocals are always graceful, able to punch us with punkish blues belting in “Better Never Than Late,” or lull us with the lovely lyricism of “Long Enough”—a song that starts by evoking one of my favorite paintings, by Vermeer.
The best records invite much replaying—songs the listener wants to learn or memorize, performances that offer a definitive treatment.  "Somebody’s Hometown" is a place to settle down in.

Posted by Andrew Shields at 2:41 PM No comments:

My first full-length poetry book, Thomas Hardy Listens To Louis Armstrong, was published on 1 July 2015 by Eyewear Publishing in London. You can order it any local bookstore near where you live (it has an ISBN and all that). It's also available directly from Eyewear, from Amazon, and soon from Small Press Distribution.

The book has three blurbs:

You’ll find sundry sorts of life that touch Andrew and you as well, in all sorts of verse: brief or long, quick or deep, free or meter, filled with experience. What’s more, you may well want to speak them to family and friends. His last poem’s last line tells us “verses did what verses mean to do”—a truth that’s worth to check back on!

Andrew Shields is maestro of the sympathetic and the savvy.  He writes with unapologetic lyricism and with a narrative self-awareness that is anymore too rare in contemporary poetry.  The poems in the volume are entirely composed—and I intend that word in all the ways one might employ it: composed in the manner of a piece of music, composed in the way one might describe someone as being emotionally pulled together.  The simple stoicism of “Sundowning” will break your heart; “Blackbird” is a masterwork.  Everything about this collection sings.

Andrew Shields is a musician himself. If you have not heard him play, read his poems. The scene in which Thomas Hardy listens to Louis Armstrong could only have been arranged by someone like him.

Plus, it was summarized in the Poetry Book Society Bulletin as follows:

Music swells from Andrew Shields' debut collection, from anonymous buskers "whose words have long been drowned out by the year" to Osip Mandelstam's 'Tambourine', from soaking in 'Monk's Dream' to hearing "unfinished poems in radio static". Rhythm and melody consume this poet, "spoken words [his] only instrument" yet conjuring verse "for the dancers / and the dance, unnoting, unwitting, unwrit" in a sweeping collection of symphonic depth and detail.

"Symphonic depth and detail"! That makes me smile. :-)
Posted by Andrew Shields at 5:00 PM No comments:

When I saw Los Lobos in the summer of 1987 at the Warfield Theater in San Francisco, Jerry Garcia was in the audience. After the opening act, I had a little chat with him about the lyrics of “Lady With A Fan”: I wanted to know if it was “his job is to shed light and not to master” or “share light.” He said, in his inimitable voice, “Some people hear shed; some hear share. Hunter wrote shed, but whatever you hear is okay by me; I’m just the singer, you know.”

During the Los Lobos set, a roadie came out and gave David Hidalgo a cherry-red Telecaster, and David strapped it on to play “Come On Let’s Go,” which he dedicated to Jerry.

A week or so later, I met a guy who had been backstage at the show, and he told me about that guitar: Jerry had come backstage with a guitar case before the show, looking for Hidalgo. When he found him, he gave him the guitar: a mint-condition vintage Telecaster. Hence the dedication!
Posted by Andrew Shields at 3:05 PM 2 comments:

When I read the poem in the magazine, I immediately grabbed my guitar and began strumming around, and in a few minutes, I had set the poem to music.

In the meantime, the song has become a staple of my band Human Shields. It's a very short and punky song, and you can watch a video of it on Facebook here.

The other day, I linked to that video, and a Facebook friend wondered about the attribution to Martin Luther. It was not that she disputed the quotation's apocryphal nature, but that she had never heard the line attributed to Luther. She also said that it did not sound like Luther to her.

Now, I can never resist pursuing the attribution of a quotation, and I am very sympathetic to my friend's sense that it didn't sound like Luther – many false attributions can be detected by how the quotations do not sound at all like anything Mark Twain or whoever would actually say. But first I just wanted to find a few cases of people attributing the line to Luther.

I found quite a few, with the interesting caveat that every single case of attribution to Luther mentioned that the quotation is surely apocryphal. But one case found something in Luther's Table Talk that sounded a bit like the line; more precisely, the passage that follows is from Richard Friedenthal's 1967 biography of Luther:

Luther's intentions were strict; he wanted to eliminate the profane songs entirely. How had it happened, he asked, that in the secular field there 'are so many fine poems and so many beautiful songs, while in the religious field we have such rotten, lifeless stuff?' What is undeniable is that he injected his own fire into the genre, wherever the tunes and words may have come from. 'The devil has no need of all the good tunes for himself,' he remarked, and took them away from him. 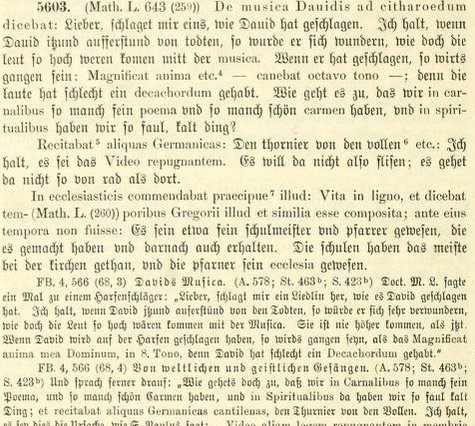 Posted by Andrew Shields at 2:21 PM No comments: