"Mrs Kawakami was quiet": A blackboard on Kazuo Ishiguro's "An Artist of the Floating World" 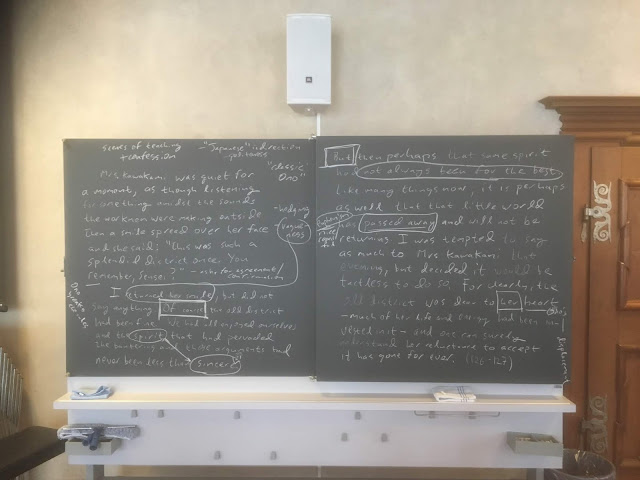 The blackboard from my class's discussion on 18 March of a passage from Kazuo Ishiguro's An Artist of the Floating World. This passage, to be precise:

Mrs Kawakami was quiet for a moment, as though listening for something amidst the sounds the workmen were making outside. Then a smile spread over her face and she said: 'This was such a splendid district once. You remember, Sensei?'
I returned her smile, but did not say anything. Of course, the old district had been fine. We had all enjoyed ourselves and the spirit that had pervaded the bantering and those arguments had never been less than sincere. But then perhaps that same spirit had not always been for the best. Like many things now, it is perhaps as well that that little world has passed away and will not be returning. I was tempted to say as much to Mrs Kawakami that evening, but decided it would be tactless to do so. For clearly, the old district was dear to her heart – much of her life and energy had been invested in it – and one can surely understand her reluctance to accept it has gone for ever. (126-127)
Posted by Andrew Shields at 9:33 PM