Tennis and The Change

12 years ago, Venus Williams was the emerging star in a sport that wasn’t always so hospitable to a young woman of color who dared to be great.

All Madison Keys heard on Wednesday were cheers and chants of “Maddy.” On the subject of change, it was the kind that a 16-year-old with a long climb ahead could believe in.

This is the end of Harvey Araton's September 1 New York Times article "As Williamses Age, Here Comes Youth." For most readers, the final sentence will read like a reference to Barack Obama's election slogan "change you can believe in." 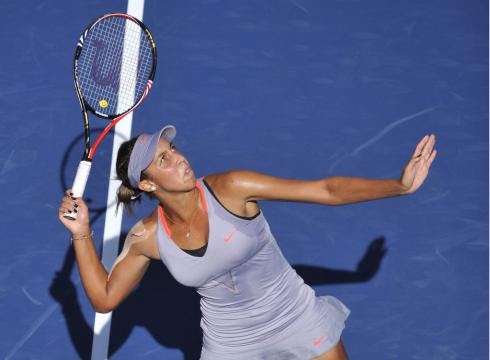 But for followers of the American poetry scene, there's another echo: Tony Hoagland's poem "The Change," the subject of much recent discussion on racism in poetry.

Whether Hoagland's poem is a depiction of racism or is itself racist, this article shows that there has been a change in the tennis world: when the Williams sisters emerged as the dominant forces in women's tennis, much latent racism became manifest. And now, Madison Keys's victory in the first round of the US Open and hard-fought, three-set loss in the second round is simply celebrated by the fans and the press as the success of a promising young American player.
Posted by Andrew Shields at 9:35 AM