From Tennyson to today 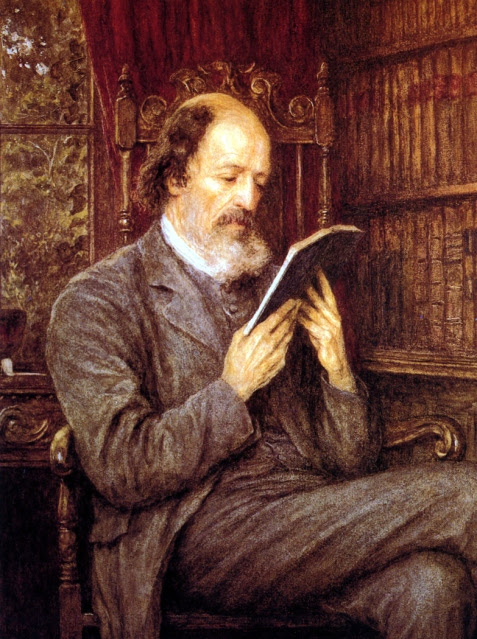 Robert Archambeau has just posted a long discussion of tensions between aestheticism and morality (or politics) in Tennyson, Yeats, and Eliot. He starts with a discussion of a tension in Tennyson's work between "cryptic, symbolic, ambiguous poems ... that resist being converted to moral messages" and poems that "told the bourgeoise reader what he wanted to hear about decency, self-sacrifice, and the keeping stiff of the upper lip." By the end of the 19th century, then, the market for the latter kind of poem had dried up, and Symbolist poets and their Modernist successors focused their attention on aesthetic issues, while still being drawn to such extra-aesthetic issues as Irish politics (Yeats) and the renewal of community (Eliot; through a return to pre-twentieth-century Christian values).

Archambeau's discussion of these issues is fascinating, and it led me to ponder the extension of his point about tensions in the work of these poets into the contemporary era. These days, many poets in North America, Great Britain, and Ireland have put a lot of energy into pondering how the audience for poetry can be increased. Since the loss of the market for moralistic poetry in the course of the nineteenth century and poetry's subsequent aestheticist turn, very little poetry has managed to reach a wider audience. Those poets who want to do so could theoretically try returning to the kind of moralism that characterizes "The Charge of the Light Brigade," but given developments in poetry since then, it is highly unlikely that they would find such a project at all interesting—and in any case, as Archambeau makes clear, there's little or no market for such work anymore anyway.

The main aestheticist strains of contemporary poetry tend to be pretty disdainful of those poets who do achieve modest success (meaning more sales than most poets, but still very small blips on the radar of whole culture), such as Billy Collins and Mary Oliver in the United States and Simon Armitage and Carol Ann Duffy in the United Kingdom. (With Armitage, at least, I could provide a defense of the aesthetic quality of all of his work, as I could with parts of the work of Collins and Duffy—neither of whom I have read all of—but that is something for another day.) But what is there for them to do, the poets who feel tensions like those felt by Tennyson, Yeats, and Eliot while also finding that the work of Armitage, Collins, Duffy, and Oliver lacks such productive tension between aesthetics and some kind of public voice? The very fact that I use the vague phrase "some kind of public voice" points toward a solution and highlights the problem at the same time: poets need to create a market for poetry to have a public voice, but it is not clear what kind of public voice that ought to be.

But here is where I return to a point I have made frequently over the years (probably somewhere on my blog, but definitely often in conversation): even if there is little market for poetry in the contemporary English-speaking world, there is a huge market for verse—it's called pop music. Now some might immediately dismiss this point by saying that song lyrics are not poetry, but I hope they would at least agree that "page poems" and song lyrics are both examples of "verse" in a broad sense that is completely consistent with the traditions of both poetry and popular song (written in lines, often with meter and rhyme). And it is worthwhile for poets to consider what it is that makes the verse of popular music so popular.

Generally, pop music does not aspire to the kind of moralism that shaped one side of Tennyson's work (although it does contain a strain of that moralism in such songs as "We Are The World"—things that make you feel like a good person when you sing along with them). And of course it is hard to generalize about all pop music without people jumping in with counterexamples. But one relatively consistent feature of pop music is that it does not impose itself on its listeners: the lyrics tend to be simple, even vague, so that they are open enough for listeners to relate them to their own lives in general and their own particular experiences.

In contrast, one relatively consistent feature of contemporary poetry in English is that it does impose itself on its readers: it makes the reader listen to the voice of the poet, instead of providing, as pop lyrics do, a space for listeners to fill with their own voices, as it were. This focus on the poet's voice is in keeping with the Romantic-aestheticist tradition that Archambeau discusses, and I am all in favor of being imposed on by poets, since I am part of that tradition. But poets who feel tensions between the privacy of aestheticism and the possibility of a public voice might well consider the ways in which pop lyrics, the contemporary verse with the broadest popular appeal, relate to the audience that consumes them.
Posted by Andrew Shields at 11:17 AM

Mark Granier was unable to post this comment for reasons unknown, so I am posting it for him:

'...even if there is little market for poetry in the contemporary English-speaking world, there is a huge market for verse—it's called pop music.'

The best popular music I'm aware of (Dylan, L Cohen, Radiohead, Talking Heads, Crash Test Dummies...), while possibly being influenced by the aesthetics of Postmodernism etc., has rarely attempted to overtly ferry such things into an audience's auditory canal. I imagine there are at least two very obvious reasons for this reluctance; the audience would likely dry up immediately and, perhaps more importantly, the ancient challenge still holds good: the desire to get your song to live on, a chord resonating in peoples' heads for at least a generation. To achieve such a thing, you need to strike an answering chord in the popular imagination, tread one of those tightrope-thin lines between passion and bathos, felt emotion and schmaltz.

Contemporary poetry is rarely up to this task, as the most intelligent poets would readily acknowledge (the sillier ones will insist on having their pomo cake and expecting others to eat it). I have quoted Muldoon before as saying, of some of Cohen's songs, that they 'are much better constructed, are built to withstand more pressure per square inch, than most poetry we meet in most magazines and, alas, find collected in most slim volumes. . . .' Whether or not you agree, there is no denying Cohen's (or Dylan's) popularity right across the spectrum, with everyone from sentimental teenagers to hifalutin poets and critics, such as yours truly.

Ironically, I suspect a good many NMS poets fail to see this dichotomy, or choose to ignore it. It must be embarrassing to acknowledge that the old or new favourites on your iPod avail of (nay, positively revel in) such detestable anachronisms as rhyme, meter, narrative, 'the lyric I'...

'But poets who feel tensions between the privacy of aestheticism and the possibility of a public voice might well consider the ways in which pop lyrics, the contemporary verse with the broadest popular appeal, relate to the audience that consumes them.'

To be fair, musicians DO have a big advantage, beyond the fact that their aesthetic 'does not impose itself on its listeners': they have the music; so their words (or lyrics) have very tried and trusted propellers to boost the flow into that coveted canal. Beyond my teens, I never much cared for Cohen's poetry (I confess I haven't read much of Dylan's), but his songs still do it for me big time. But popular MS poets, such as Armitage, Oliver, B Collins and CAD, whom you mentioned, also share some of the advantages of pop musicians. If they do not have resonant chords, they certainly have plenty of resonant phrases and images. And such phrases and images are heartily despised by NMS poets, and perhaps quite a few MS ones too, many of whom would sing the praises of Dylan, Cohen, etc.