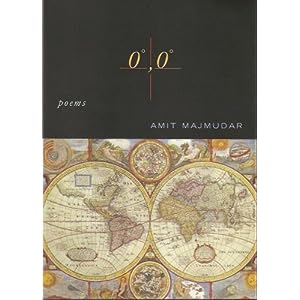 "Inevitabilities found by accident" are what one should "look for in a ghazal," according to the final line of Amit Majmudar's ghazal "By Accident," and hte interplay between the inevitable and the accidental runs through his collection 0°, 0°—or how the accidental later seems to have been (or perhaps makes itself seem?) inevitable: "You can / Make anything sound predetermined just / By rhyming on it twice," he writes in "M. C. Escher and the Art of Tessellation," which suggest that poetry produces the sense of inevitability Majmudar keeps circling around, and that he's aware that that might be the case.

But there's something else going on here, too: Majmudar keeps looking at how things might seem if seen backwards, not from the accidental to the inevitable but the other way around. The Escher poem begins with a stanza about mathematicians:

Mathematicians make the toughest audience.
Your complexity has to arabesque a chalkboard
And then, with joyful slashes, above, below,
Cancel itself before their eyes. Simply put,
They expect you to write them a Paradise Lost
And then resolve it back to Genesis.

This provides a nice twist on Jorge Luis Borges's suggestion that the Odyssey could be read as a version of Ulysses [though I just checked "Pierre Menard, Author of the Quixote" and discovered that I had misremembered it: he speculates on reading the Aeneid as having preceded the Odyssey], but it also marks how Occam's razor cuts away elaboration in favor of simplicity—sacrificing poetry to proof? Producing a reading of history based on its outcome? [Avoid Nietzsche digression here.]

Yet the source does not inevitably contain what flows from it, for accident must still play a role, and in "Merlin," Majmudar develops an elaborate conceit (Merlin living his life backwards) to arrive at a scene in which Merlin meets the first cave painter: "How will all he has witnessed / result from that stargazing hunter?" How does the accidental come to seem inevitable? "Answers for the Whirlwind" concludes with a passage that reads like an answer to that question:

With nothing but hands

Experimentation, memory, and technology lead from the stargazer to us; the work of hands turns accidents into inevitabilities.

But such a process does not necessarily involve progress; a dark thread of violence runs through Majmudar's book, at great length in "Letter to the Infantry" and "The Cherry Blossoms at Walter Reed," both of which address the Iraq war, and allegorically in "Michael Reminisces about the War." That's the Archangel Michael, and the war in question is the one between God's host and the fallen angels. The poem concludes with God and Michael celebrating their victory and their soldiers:

On the throne with a wineglass, He praised me
For discovering good little killers inside
Of those golden androgynous boys.

And in retrospect, of course, it seems inevitable that the "golden androgynous boys "had "good little killers" inside themselves, even it was accidents, not inevitabilities, that gave those killers life. The darkness in Majmudar's book is alleviated by his sensitivity to the accidental, unpredictable, human side of violence, all of which it makes it possible to choose or refuse it. And (even though the poem in question is called "The Miscarriage") he ends the book with "hope dry and brittle but intact." That hope is fragile, but it survives the accident that creates it, and ends up seeming inevitable.
Posted by Andrew Shields at 6:24 AM

Thanks for this, Andrew. Wow! Beautiful stuff. I just ordered the book....