The Quarry and the Lot 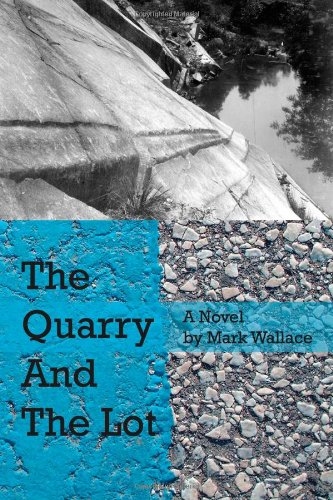 "Maybe writing is a hobby, you know? I might as well build shelves or go fishing."

So says Luke Owen, a poet and community-college teacher who is one of the four narrators of Mark Wallace's novel The Quarry and the Lot. He clearly uses the idea that writing might be a "hobby" as a negative point: "hobbies" are merely (to quote a definition) "something that one likes to do or study in one's spare time" and are of little importance to anyone else; a further definition at the same link says that a hobby is "engaged in primarily for pleasure." And Luke would not be writing just for his own pleasure.

Yet I have been pondering for quite a while the idea that considering writing a hobby might be a good idea. The rest of the first definition of hobby that I quoted above adds that a hobby is a "favorite pastime or avocation"—and it's the word "avocation" that is interesting here. One sense of the shorter word "vocation" is that of a calling, as to the priesthood, and that is, of course, what writers like to think of their writing as. A "vocation" is something serious; an "avocation" is apparently less serious.

But if I play briefly with the idea that Luke Owen is a real person, I'd have to conclude that he would find the idea of writing as a "vocation" in a spiritual sense ridiculous—I don't think he ever makes any explicitly anti-spiritual remarks, but his great skepticism about so many things (especially the suburbs he grew up in) would surely apply to such an idea as well. But if such a writer cannot see his writing as a "vocation," then what's left but to consider it an "avocation"—a "hobby."

But that would make it as apparently insignificant (from Luke's perspective) as "building shelves or going fishing." My immediate thought is to wonder what's wrong with either of those activities (and Nick, one of the novel's other narrators, does in fact run a furniture and carpentry shop he inherited from his father). It reminds me of my recent post about ham radio and hardcore. And in fact, in the novel, when Luke was first active in poetry in the DC area, he was also part of the hardcore scene, which suggests that he would see hardcore (if he were a musician rather than a writer) as something worthwhile that is more than "just a hobby."

Near the end of the novel, Luke has shifted ground on this issue. In a discussion with his father, he surprises his father by using the word "duty" ("I've never heard you use the word duty before") in a reference to "the duty of the artist." He explains what that duty is: "To keep doing what you're doing and let other people know." It's the second phrase there that makes "artistic" work (slightly) "more than just a hobby": you let other people know what you're doing not because you want to sell them shelves or go fishing with them or exchange codes on your shortwave radio, but because you want to communicate with them.

And in this sense, I'm grateful to Mark Wallace, because he "kept doing what he does" and also "let other people know" by publishing his book. There's much more to it than just Luke's crisis as a writer, and I recommend it wholeheartedly to ... well, to anyone whose hobby is to read thought-provoking novels.
Posted by Andrew Shields at 10:27 PM

Nice article, thanks for the information.

One does wonder sometimes why so much fuss is made about writing. And then one realizes that it is writers who are making all the fuss.

Can that be generalized?

"One does wonder sometimes why so much fuss is made about X-ing. And then one realizes that it is X-ers who are making all the fuss."

Where X is some activity?