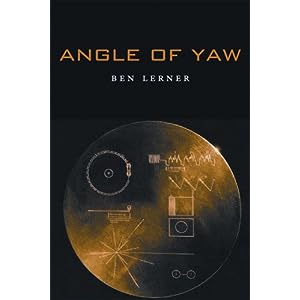 The girl plays with nonrepresentational dolls. Her games are devoid of any narrative content, amusements that depend upon their own intrinsic form. If you make her a present of a toy, she will discard it and play with the box. And yet she will only play with a box that once contained a toy. Her favorite toy was a notion about color. She lost it in the snow. (Ben Lerner, "Angle of Yaw")

This prose poem from Ben Lerner's Angle of Yaw lightly stakes out and ironizes an aesthetics that is not its own: the aesthetics of "nonrepresentation," of the absence of narrative, of a formal game played for its own sake and not for the sake of expressing anything. This is the kind of art that leads to discussions that begin with the phrase "it's about ..." and then can apparently go anywhere they like without reference to the dolls, toys, or snow that make up the work. All that's left are the containers the work is or was in, and "a notion about color" that has in fact been lost.

A reading of this poem along these lines could begin with "it's about ..." and then talk about the aesthetics it describes. But the poem itself is representational, and it does have narrative content. So if it is "about" its aesthetics, it is not about the aesthetics that it describes—or at least it is about the limits of such an aesthetics. The poem celebrates the girl's play and thus apparently privileges an emphasis on form over content, but in its own shape, it is about both the box and the toy: its shape and form are fun to play with, but what really makes them fun to play with is their content, and the wonderful "representational" image of the creative girl.

As such, the poem "is about" the necessity of content, or perhaps the necessity of a relationship to content even in its absence: the nonrepresentational, the lack of narrative, the empty box, the notion of color lost in the snow—all these "forms" depend on their absent content. And what they once contained is also important: they have to have contained something worth playing with; otherwise, they themselves aren't worth playing with either.
Posted by Andrew Shields at 6:15 AM

Once again it's all about snow for Ben Lerner. Perfect in form yet ephemeral in content. Will it melt and reveal the toy, the notion, the color?!

"Real snow / on the stage. Fake blood on the snow."